SEATTLE — As great restaurants will do, JuneBaby pulled me in from more than one direction. The first of course was the sheer pleasure of the cooking. (Without that, the others wouldn’t matter.)

The food is Southern, which I was primed to like before I walked through JuneBaby’s Dutch doors in this city’s Ravenna neighborhood. And whenever Edouardo Jordan’s leather menu covers offered a dish I’d expect to see at a Southern restaurant, he gave me something better than I’d imagined.

Fried catfish over grits can be better in theory than reality. At JuneBaby, the fish, from an Idaho farm, is firm, tight, fresh and free of bottom-feeder muddiness. The crust is semolina, which stays crisp and unsoggy. The grits are fluffy, yellow, full of corn flavor.

Ringing the grits is an orange circle of shrimp bisque. Strictly speaking, shrimp bisque has no business on fish and grits, but if you see the bisque as a tamer, richer stand-in for hot sauce it makes a delicious kind of sense.

This is the tactic — find superior ingredients and bring some fancy kitchen tricks to bear on them — favored by most of the South’s prominent restaurants. If that were all Mr. Jordan had in mind, I would still think JuneBaby is a very good restaurant.

But on the menu covers of this nearly year-old establishment are dishes that I wasn’t expecting, that many of those other restaurants don’t serve, that pulled me in deeper.

Like any good Southern chef, Mr. Jordan loves his pork. But I paid closer attention when I noticed which parts of the pig he’s cooking. He will boil ham hocks with collard greens until the leaves are soft and velvety and wonderfully smoky.

He stews pigs’ ears until they surrender their ornery stiffness, then slices and fries them into irresistible, crunchy sticks. He seasons okra and tomatoes with a North African spice mix and stews them with hog maw, otherwise known as the outer wall of the stomach. 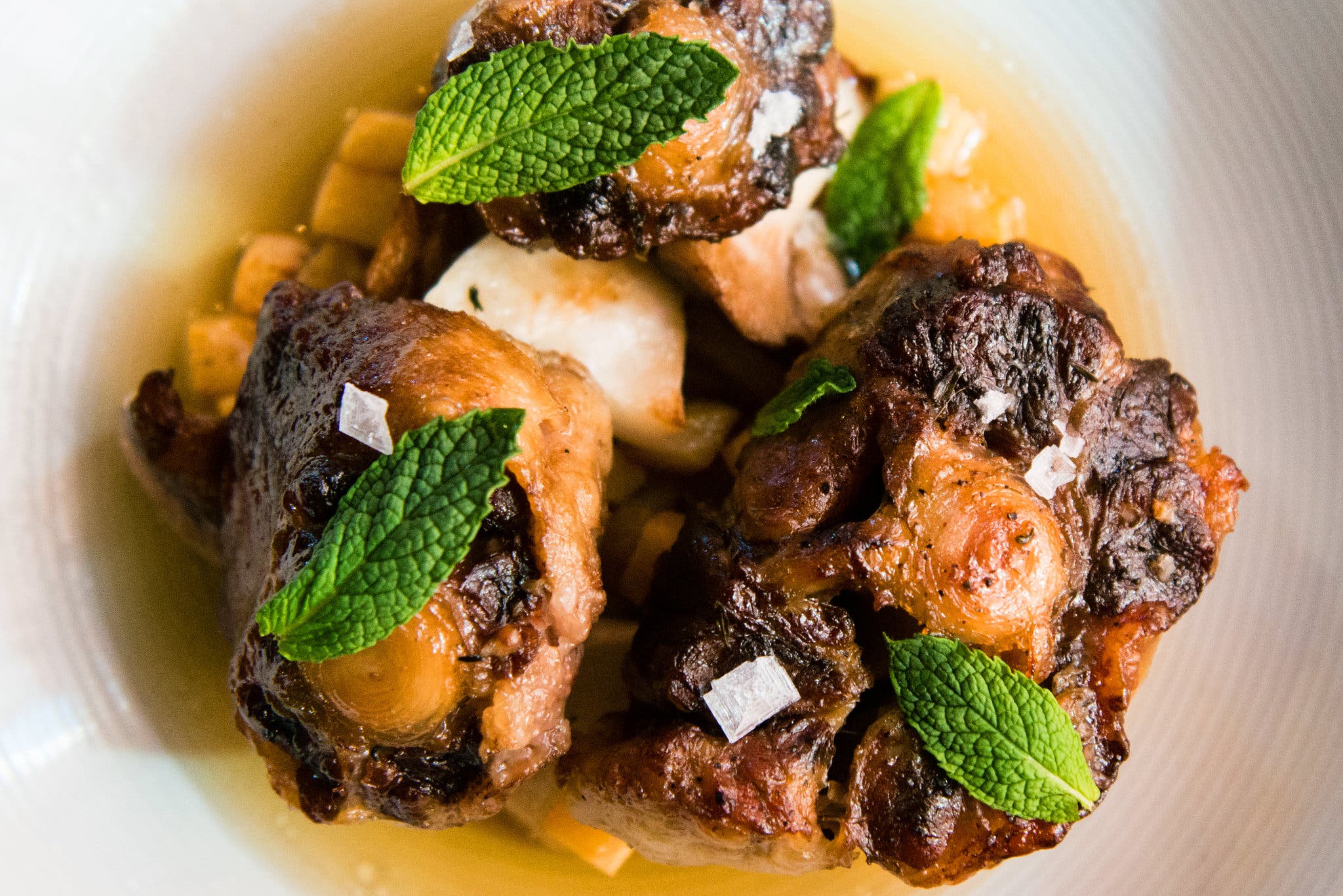 “Almost nobody likes it,” Josh Ozersky wrote of hog maw in Esquire in 2014, a year before he died. “It’s tough and tasteless, like the chitterlings to which it is attached.”

Mr. Jordan would disagree. By the way, he cooks chitterlings, too.

These are the cuts that enslaved black people on plantations were allowed to keep when hogs were killed; after Emancipation, these were the cuts they might have had the money to afford and the skills to make into something memorable. Their healthy representation on the menu tells you that JuneBaby is not just a Southern restaurant but, specifically, a black Southern restaurant.

Of course, much of the huge edifice of Southern food was built by black farmers and black cooks: as enslaved people in plantation kitchens and in their own families’ cabins; later, as domestic servants, hotel chefs, railroad cooks, restaurateurs and entrepreneurs. Mr. Jordan is interested in all of it, but he particularly wants to introduce customers to the food of his family.

He was raised in St. Petersburg, Fla., where the surrounding culture wasn’t particularly Southern but his mother’s table was. “The food she cooked was the only food she knew,” Mr. Jordan said in a phone interview. “That’s where I got my experience of fried fish, fried chicken, braised meats, offals, bread pudding.”

JuneBaby’s oxtails are a tribute to one of her mainstays. Mr. Jordan deepens the flavor of the beef by roasting it before braising. He focuses the broth by clarifying it with egg whites, as he would have done in culinary school and in kitchens where he’s worked, such as the French Laundry in California and Per Se and Lincoln Ristorante in New York.

But he doesn’t try to prettify what the menu calls Momma Jordan’s Oxtails, serving them whole, with cubes of turnip and rutabaga, the hunks of beef barely hanging onto tailbones whose wide, white wings flare out like propeller blades.

The chitterlings are essentially his paternal grandmother’s recipe, stewed with onions, carrots and garlic. Instead of water, he might use some chicken stock, or the collagen-rich liquid thrown off by the pigs’ ears. Rather than use a pot on the stove, he softens them in a pressure cooker.

This both speeds the process by several hours and allows him to welcome the customers who line up each night waiting for the doors to open into a dining room that does not smell like intestines.

As variety meats go, intestines are not at the top of my list. Out of strong curiosity, I’ve eaten them packed into andouillettes in France, fried and kept under heat lamps in a gas station in Mississippi, and grilled over charcoal in the backyard of a Korean restaurant in Queens. I liked them best at JuneBaby.

“My grandmother’s chitterlings were a thing I loved, but never talked about,” Mr. Jordan said, a thought that will sound familiar to immigrants and other people whose families’ food veers from the mainstream American diet. “You tell your friends as a kid you eat chitterlings, they run away from you.”

Eventually he ran away from them, too, until he began to prepare a follow-up to his first restaurant as both chef and owner, Salare, down the street. The menu at Salare, he has said, expresses what he has learned in his career, centering on the Italian and French food he made in other people’s restaurants.

JuneBaby, though, “speaks on who I am as an individual soul and as an African-American male.” And to do that he realized he would need to go back to “these ingredients that we don’t want to talk about” and start to show them off.

Junebaby’s chitterlings never come off the menu. They are not a huge revenue center for the restaurant but they may be, in a cultural sense, a loss leader.